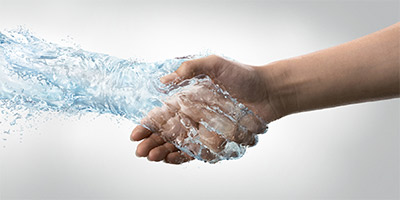 5Dept. of Biomedical Laboratory Science and Institute of Health Science,

Abstract: Certain minerals can produce alkaline-reduced water with high pH and low oxidation-reduction potential (ORP) when dissolved in water. Alkaline-reduced water (ARW) showed a significant anticancer effect. When B16 melanoma cells were inoculated subcutaneously and intra-peritoneally, C56BL/6 mice fed with ARW showed tumor growth delay, and the survival span was significantly lengthened. ARW also showed the inhibition of metastasis by reducing the numbers of B16 melanoma colonies when injected through tail vein. The amount of reactive oxygen species (ROS) was very reduced when fed with ARW except for spleen, which is a major organ for immunity. Even for normal mice, ARW intake invoked systemic cytokines, such as Th1 (IFN-γ, IL-12) and Th2 (IL-4, IL-5), suggesting a strong immuno-modulation effect. Both ROS scavenging effect and immuno-modulation effect might be responsible for anticancer effect of alkaline reduced water. Keyword: alkaline reduced water, anticancer effect, antioxidant, immuno-modulation

Reactive oxygen species (ROS) or free radicals are one of the major offenders to render oxidative damage to biological macromolecules. These unstable ROS are known to cause or aggravate a variety of incurable diseases such as cancer, cardiovascular diseases, neuro[1]degenerative diseases as well as aging 1, 2). The cellular radial-scavengers such as superoxide dismutase, catalase, glutathion peroxidase are natural defense system against ROS. External source of antioxidative protection include antioxidant vitamins C and E, carotene, and carotenoids as well as minerals such as selenium and zinc. Great efforts have been made in an attempt to find safe and potent natural antioxidants.

Water consists 70% of Human body. Water reaches every tissue of human body within 30 minutes after drinking. It even flows through blood brain barrier with no obstacle and has almost no side effects. If water itself could work as a radical scavenger, it would be an ideal antioxidant 3). Recently, electrolyzed-reduced water with high pH and significant negative redox potential (ORP) was shown to have SOD-like activity and catalase-like activity, and thus, scavenge active oxygen species and protect DNA from damage by oxygen radicals in vitro 4). We developed a mineral combination to produce alkaline reduced water (ARW) with high pH and low ORP similar to electrolyzed-reduced water. The mineral combination was easy to carry and less expensive than the system to produce electrolyzed-reduced water. The present article demonstrates anticancer effect of alkaline reduced water in animal model.

Concentrations of cytokines from mice sera were measured by conventional sandwich ELISA method. A coating and biotinylated capture antibody was purchased from Pharmingen (USA): clones JES5-2A5 and JES5- 16E3 for IL-4, and clones R4-6A2 and XMG1-2 for IL5, respectively. Coating on 96-well microtiter plate was performed with 250 g coating antibody. Sera sample, biotinylated capture antibody, secondary antibody and then streptavidinylated HRP was sequentially added, incubated, and washed. o-phenylenediamine solution was added for development and 2N sulfuric acid for stop the development. The absorbance at 490 nm was measured with ELISA reader at 490 nm.

Quantitation of cytosolic ROS was measured by oxidation method of 2’,7’-dichlorofluroscein-diacetate (DCF-DA) as described in elsewhere 5). 12.5 M DCFDA was incubated with liver, spleen, lung, or brain homogenate and change of fluorescence was measured at 485 nm of excitation wavelength and 585 nm of emission wavelength. The relative fluorescence unit (RFU) was calculated to 1 mg protein in homogenate.

ARW was made by putting mineral combinations into a water bottle. The pH of water was increased up to 10.5 and ORP was decreased until -200mv. The mineral contents of ARW were also increased time-dependently.

C57BL/6 mice (4-5 weeks old) were obtained from the Daehan Bio Link Co., Ltd. (Chungbuk, Korea), and maintained on standard chow and tap water until taking ARW. Mouse B16 melanoma cell lines were maintained in Dulbecco’s Modified Eagle’s Medium (DMEM) supplemented with 5% heat-inactivated fetal bovine serum (FBS) in a humidified atmosphere of 95% air-5% CO2 at 37°C. The high-metastatic B16 cell line was isolated from the lung of C57BL/6 mouse, which had been inoculated intraperitoneally with B16 cells. Cells were cloned by the limiting dilution methods and selected cloned were inoculated into mice. This method was repeated thrice, and the final clone with high metastatic potential was obtained as B16-BL6 melanoma cells.

In Vivo Evaluation of Antimetastatic Effect

In Vivo Suppression of Tumor Growth

Cultured B16-BL6 melanoma cells were harvested with 2 mM EDTA in PBS, then washed three times with PBS. 1 × 106 B16-BL6 melanoma cells were subcutaneouly injected on the back of C57BL/6 mouse. The length of long and short axis of tumor was measured every day and the volumes were calculated using the formula ab2 /2, where a is the length of long axis and b the length of short axis. Survival curve was plotted using Kaplan-Meier method.

Evaluation of immuno-modulating effect of ARW

ARW intake invoked systemic cytokines, such as Th1 (IFN- ϒIL-12), cytokines for cellular immunity, and Th2 (IL-4, IL-5), cytokines for humoral immunity (Fig. 2). This suggests that ARW stimulates both cellular and humoral immunity. Th1 and Th2 reached maximal peak after 2 weeks of ARW feeding and returned back to baseline. Cytokines levels of tap water-fed control remained at the baseline. 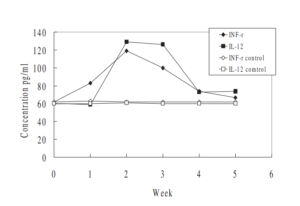 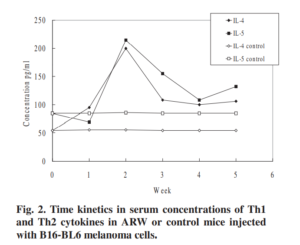 Effect of ARW on tumor growth and survival time

Evaluation of antimetastatic activity of ARW on lung metastasis of B16

After intravenous injection of B16 melanoma cells to C57BL/6 mice through the tail vein, antimetastatic activity of ARW was evaluated. 15 days after injection, mice were sacrificed. Their lung tissues were removed, and the metastatic lesions were compared. ARW fed group had fewer metastatic lesions. 257 Black colonies were counted on the lungs of ARW group, and 145 black spots were shown in the control group, indicating 44% inhibition against metastasis of melanoma cells. As melanoma cell is known to exhibit increased oxidative stress that could support the progression of metastasis, concentration of ROS was also measured for each organ of the same B16 melanoma injected mice using DCFH-DA (Fig. 1). The amount of ROS for lung, liver, and kidney was very low in ARW fed mice compared to that of control. However, the spleen, which is a major organ for immunity, shows very high ROS in ARW fed group. This might suggest the immune-boosting effect of ARW.

Recently, electrolyzed-reduced water with high pH and significant negative redox potential was shown to have SOD-like activity and catalase-like activity, and thus, scavenge ROS and protect DNA from damage by oxygen radicals in vitro. If ARW is actually acting as antioxidants and protects DNA from damage, it might be hypothesized that ARW intake would be possible to show anticancer effect.

The present investigation demonstrates the anticancer effect of ARW. ARW intake slowed down tumor growth, and inhibited the intravenous metastasis, leading to a prolonged survival span in B16 melanoma injected mice. B16 melanoma cell is one of the most frequent tumors in humans and is characterized by its high capacity for invasion and metastasis 6, 7). They escape from immune surveillance and spread more rapidly than any other tumors using several mechanisms including MHC downregulation, increasing reactive oxygen species (ROS) levels, and thus, expedite the progression of metastasis 8). Our study demonstrated that ARW not only acts as an antioxidant but also acts as a strong immnuo-moduator, both of which could be responsible for the anticancer effect. Thus, ARW is expected to be effective for the various diseases resulting from low immunity and/or high reactive oxygen species as well as for the prevention of cancer.

ARW not only has high pH and low ORP but also contain some magnesium ion. Recently, magnesium was shown to be effective for the prevention of various diseases8). We cannot exclude the possibility that the magnesium in ARW might have contributed to the anticancer effect. The water reaches every tissue of the human body within 30 minutes after drinking. It even flows through the blood-brain barrier with no obstacle and has almost no side effects. Taking ARW could be an ideal way to maintain health.